Hints to Making Sperm in a Dish

It has not been easy to steer pluripotent cells toward making sperm in vitro. Learning how sperm precursors develop in vivo allowed a group led by Mitinori Saitou at RIKEN in Kobe, Japan, to derive embryonic primordial germ cells from embryonic cells in culture and use them to restore fertility in sterile mice1. The work suggests that the secret to making some differentiation programs work may lie in shielding precursor cells from inhibitory signals generated within heterogenous cell cultures.

Read more: Hints to Making Sperm in a Dish

These molecules could be used in the detection of chemical warfare agents.

A family of fluorescent dye molecules has been developed for use in “on-off” fluorescence detection of specific chemicals. By themselves, these molecules do not fluoresce. However, when exposed to certain chemical analytes in liquid or vapor forms, they do fluoresce (see figure). These compounds are amenable to fixation on or in a variety of substrates for use in fluorescence-based detection devices: they can be chemically modified to anchor them to porous or non-porous solid supports or can be incorporated into polymer films. Potential applications for these compounds include detection of chemical warfare agents, sensing of acidity or alkalinity, and fluorescent tagging of proteins in pharmaceutical research and development. These molecules could also be exploited for use as two-photon materials for photodynamic therapy in the treatment of certain cancers and other diseases.

Genetic vector is off in differentiated cells, on in stem cells

s is vital for engrafting of haematopoietic stem cells

Whether coming from a bone marrow transplant or a patient's own circulating blood, haematopoietic stem cells are remarkably good at finding their way back to the bone marrow niche. David Scadden and his colleagues at the Harvard Stem Cell Institute in Cambridge, Massachusetts, report that a G-protein known as G

s is necessary to direct these cells to the niche1.

s is essential during development. To be able to look at the effect of its absence, the group developed a chimeric mouse in which some cells in each tissue expressed the protein and some did not; the distribution of cells missing and expressing the protein should have been random. As expected, both types of cells contributed to fetal liver, skin and muscle. However, cells that were missing the protein were also missing in the bone marrow. Surprisingly, in vivo experiments showed that G

s-/- cells had the same haematopoietic potential as their wild-type counterparts — they were simply unable to engraft in the bone marrow during development.

[Editor's note: It's not easy to assess a study's ramifications from press releases, three of which caught my eye this month. I asked Phil Schwartz, a neural stem cell expert at Children's Hospital of Orange County, California, to help me understand the gap between study and therapy. I also asked authors from each paper to respond. This article is one of three resulting from this process.]

Research summary by Nature Reports Stem Cells: One problem with cell transplantation is that cell transplants die. Bioscaffolding is a way to keep cells alive so that they can engraft and integrate. Researchers led by Michel Modo from King's College London made polymer particles that could be coated with neural stem cells. 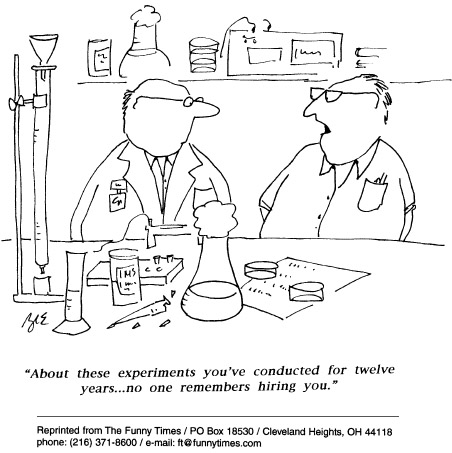